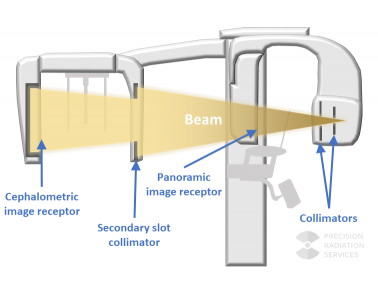 Have you ever wondered what is involved in dental x-ray compliance testing? Do you know which elements of the x-ray machine are tested for compliance with the regulations and how these relate to the performance and safety of the equipment? This series of articles will explain the assessments that are performed in routine compliance testing of dental x-ray systems.

Part 1 of this series focuses on evaluation of the x-ray beam collimation system.

The collimation system of an x-ray machine is responsible for controlling the size and shape of the x-ray beam for successful alignment with the relevant patient anatomy and the image detector/receptor.

The integrity of the collimation system has important implications for patient radiation exposure, image quality and image retake rates. Consider the fact that an under-collimated beam unnecessarily irradiates tissue lying outside of the imaging field-of-view. Radiation-sensitive tissues that can be unnecessarily exposed include the thyroid, brain, and red bone marrow in the mandible. Furthermore, large beams generate additional scatter-radiation that can noticeably degrade image-contrast. On the other hand, beams that are over-collimated or poorly aligned are more likely to produce cut-off artefacts and non-diagnostic images.

A collimator is simply a lead-shielded plate with a central aperture that defines the size and shape of the beam. Radiation is absorbed in the lead plate and passes freely through the aperture.

Figure 1 below shows how x-rays are produced at a small focal spot within the x-ray tube. A small segment of this radiation is allowed to pass freely through a tube ‘window’ to form an initial but poorly defined beam, while the remaining x-rays are absorbed by shielding within the tube head. A primary collimator works to define the size and shape of this initial beam while also helping to eliminate unwanted extra-focal radiation that is produced in a broader area around the focal spot.

In intraoral units, the primary collimator is included at the proximal end of the position indicating device (PID) / cone to produce either a circular or rectangular shaped beam. Panoramic and scanning (CCD) cephalometric systems use slit-shaped collimator apertures that form narrow vertical beams to scan the patient while minimising scatter (Figure 2). In contrast, flat-panel detector (FPD) based systems have rectangular collimators with motorised shutters that generate changeable field sizes. 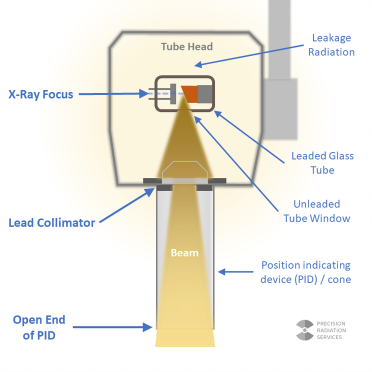 A secondary collimation system is also included on some types of equipment to further restrict the beam and also reduce the amount of penumbral blurring at the edges of the x-ray field. On intraoral units, a lead-lined PID or attachable rectangular collimator device works to this effect. Scanning cephalometric systems have a secondary collimator slit mounted prominently on the cephalostat prior to the patient-entry point (Figure 2). Finally, the image receptors of extraoral equipment may be self-collimated to reject scatter radiation generated outside of the imaging volume, while the receptor housing is shielded to intercept and stop the beam.

The following compliance assessment criteria apply to the collimation of intraoral units registered in Western Australia.

Note that these requirements apply to the x-ray field as measured at the open end of the PID. Figure 3 shows examples of compliant and non-compliant x-ray beams in intraoral radiography.

To evaluate the collimation system, the compliance tester uses a device that allows them to visualise a cross-section of the x-ray field. For this there are several options which include fluorescent screens, self-developing film or PSP receptors. Our preference is to use a fluorescent screen device which converts x-ray energy to visible green light that is viewed directly to ‘see’ the x-ray field (Figure 4). With this method the room lighting should be dimmed if possible to help with the visualisation.

Scanning-type extraoral systems have separate requirements to be evaluated by the compliance tester.

Again there are multiple ways to conduct these assessments. An accurate and objective method is with self-developing film called radiochromic or Gafchromic film that spontaneously undergoes polymerisation and darkens when exposed to x-rays. When placed at the corners of the marked area of the image detector, these films appear in the image and reveal the size and placement of the beam with respect to the image receptor (Figure 5).

Figure 5: (a) Strip of self-developing radiochromic film, (b) Radiochromic film placed at the marked edges of the image detector can reveal the size and alignment of the beam.

The requirements for FPD cephalometric systems are:

The requirements for CBCT systems are:

In evaluating flat panel detector systems it is convenient to use fluorescent screens to visualise the x-ray beam at the image receptor. Figure 6 shows how fluorescence screens placed at the corners of the flat panel detector can be used to confirm whether the beam is correctly collimated to the detector.

Figure 6: Examples of acceptable and unacceptable beam alignment to the FPD, as revealed by fluorescent screens placed at the corners of the image receptor markings.

What can go wrong with collimation?

Accurate beam collimation relies on maintaining precise geometrical relationships between the x-ray focal point, the collimator apertures, and the image receptor. Non-compliances relating to collimating are relatively rare in practice, but can have a wide range of possible causes. Potential causes for non-compliance include installation of non-conforming equipment, manufacturing or assembly errors, improper re-assembly following servicing, mechanical slop or sag of components, component damage, or movement of parts caused by physical vibration or shock.

In summary, accurate beam collimation is important for optimising patient radiation exposure and and image quality while reducing the likelihood of image cut-off artefacts. A number of assessment criteria apply to each class of dental x-ray equipment. Compliance testing of collimation involves the use of devices such as fluorescent screens or self-developing films that are used to determine the size, shape and position of the x-ray beam.

The next article in this series will cover performance testing of the x-ray generator and control circuitry.